We have been surprised on more than a couple of occasions by the quality of Sci-Fi from different parts of the continent. During the heyday of pulp, there were many sci-fi stories coming out of places like Egypt for example. We keep a catalogue of traditional pulp cover on our website and Facebook page , and try to find as many non-Western examples as possible. That being said, the local publishing scene in South Africa does seem to be more developed in some ways, and this has led to the establishment of wider niche or genre markets locally in many genres, sci-fi included.

Jenna Bass : It also depends on whether one is talking Science Fiction or Speculative Fiction—again, a much-debated boundary. It seems to us that speculative fiction and fantasy have a strong tradition elsewhere on the continent—especially in the immensely rich literary scene in Nigeria. Could you perhaps reflect on possible linkages between what it means to be white in South Africa and on the continent and the genre of science fiction? I think we can agree that there is a historic link between whiteness and the ability to publish or at least access to publishing platforms in South Africa, as a result of Apartheid and its legacies.

Simply put, generations before us placed vast resources in developing cultural spaces for white South African voices, while black publishing was often left to fend for itself with great success by some, such as DRUM magazine. Even whiteness in South Africa is not a homogenous class specifically since we have both English, i. British colonial influence, and Afrikaans, ie. Dutch colonial influences. Maybe we should just clarify our positions? Jenna is an English speaking South Africa, and I am Afrikaans, and in some ways we still need to speak from our own experiences, as frustrating as that is.

What I can say is that there has been a massive change in the identity of young Afrikaans South Africans, especially in Cape Town, and especially those working in so-called creative fields. While we grew up in the last years of Apartheid, for many of us our teenage years naturally angst-ridden were compounded with a kind of identity schism. Overnight the rules of citizenship changed or at least what citizenship meant , and the aspects of European enlightenment that fueled so much Afrikaans Apartheid rhetoric came crashing down, and suddenly we saw ourselves as the offspring of racists, bigots or worse.

This was particularly difficult for those young Afrikaans writers, artists, creators etc. I think this alienation from both a wider national identity, as well as close communities , especially during such formative years, is a strong driving force for imaginative i. Alternative realities. I guess this can be considered purely as a need for some form of escapism, but in the case of South Africa I think there are other aspects and archetypes in sci-fi conventions that we can relate to on a local level—overarching, hegemonic power-structures, universalist good vs.


Many people still suppose that sci-fi is somehow out of place in Africa, and I think this is largely because Africa is not generally seen as a place of technological advances, which is of course nonsense. Jenna Bass : I would refer back to the possibility that South African Sci-Fi, especially by white writers, is often simply just more recognizable as Sci-Fi. It comes from writers who have long been immersed in the genre and niche, and have a frequently American or British infused perspective thereon.

There is still a lot of respect for the conventions, which is maybe in some ways less prevalent among writers elsewhere on the continent.

Why is it important for small publications to help carve out emerging African genres like crime fiction and science fiction? When Jenna and I started Jungle Jim , we as in the global collective of writers, publishers, designers etc. So starting a niche, printed magazine seemed somehow counterintuitive to the times. Of course it turns out that people are not necessarily reading less, but rather that people are reading differently. The convergence of many technologies internet, riso printing, international banking etc. Doing something like Jungle Jim even 5 years ago would have been a lot more challenging, and 10 years ago it would have been a vastly more difficult endeavor for even the bigger publishing houses.

Even in the spheres of online publishing ebooks, essentially , its more difficult for these publishers since they now have to compete with an audience who read far more, but from a multitude of sources through an infinite number of genres, styles etc. I see these forms of divergent media consumption as far more closely modeled on the tradition of reading as popular entertainment as apposed to the more narrow and formalized classes imposed by big publishing, i.

Ultimately I think there is a far bigger audience for popular, entertaining fiction than most of us will concede, since we are so used to seeing the singular format—a book or the occasional literary journal which invariably attracts a particular class of reader. Historically we have been very reliant on larger establishments to produce our fiction, and this is something that is luckily changing very rapidly, and is of great importance in Africa. In many ways our so-called lack of development is our biggest asset.

In many parts of this continent the cultural sphere is not yet dominated by western media interests. This, coupled with the low barrier of entry into publishing today, can enable many people to start producing, collaborating and distributing their own entertainment. We have the possibilities today to define Africa the way we want to, and we can do it at almost at no cost! Images from Jungle Jim Facebook Page. Issue 22 of Jungle Jim is out. Order HERE. Tags: african genre fiction , african noir , african pulp fiction , african science fiction , chimurenga , Hannes Bernard , Home , Jenna Bass , jungle jim , kwani , Matthew Omelsky.

Twitter Username. Facebook URL. Notify me of follow-up comments by email. Welcome to Brittle Paper, your go-to site for African writing and literary culture. We bring you all the latest news and juicy updates on publications, authors, events, prizes, and lifestyle. Follow us on Twitter and Instagram brittlepaper and sign up for our "I love African Literature" newsletter.

Subscribe for African literature news, and receive a free copy of our "Guide to African Novels. Google has announced a new subsea Internet cable in the Atlantic named Equaino, after the Nigerian memoirist Olaudah Equaino who […]. The […].

Archive for the ‘Short Stories’ Category

Jennifer Nansubuga Makumbi is on a press tour for her new book, the short story collection Manchester Happened, published in […]. Fiction House, which published the comics, was primarily a pulp magazine publisher. 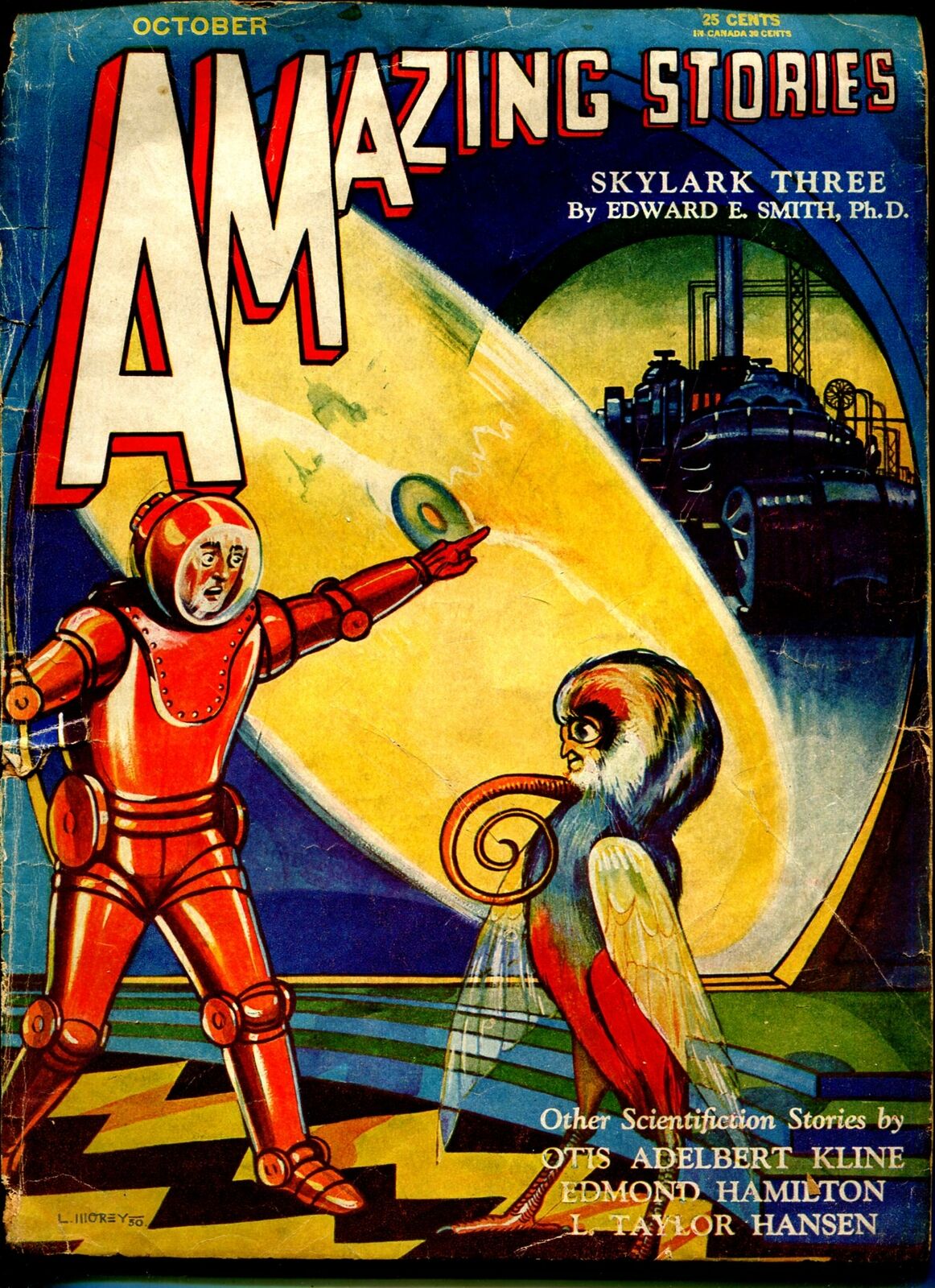 They had a jungle pulp series titled Jungle Stories , which featured the adventures of Ki-Gor , a white-skinned Tarzan -like character. It was near the end of that year run that Fiction House published a pulp magazine version of Sheena. The one-and-only issue of Sheena, Queen of the Jungle was published in the spring of The pulp business was a harsh and unforgiving one. There was another Sheena story, after this pulp hit the newsstands. Three years later, Sheena made her final pulp magazine appearance in the final issue of Jungle Stories in I would guess that the publishers knew in advance that this would be the final issue of the magazine, and were trying to scrape up enough material to fill out a page pulp.

Maybe they had a left-over Sheena story that had been planned for the aborted second Sheena pulp magazine, and used it to fill out the final Jungle Stories issue. The previous three Sheena stories, as published in the spring of , were credited to James Anson Buck. Both names are presumably pseudonyms, house names for nameless Fiction House authors. So, being the curious pulp guy that I am, I decided to read the sole Sheena pulp. The first thing I noticed when I opened it was the table of contents. The pulp contained three Sheena stories.

That was most unusual for a character pulp. But no, in this one, there were three stories featuring the main character.

All three were touted to be novels, but their lengths of 18, words, 21, words and 19, words really stretched the definition of a novel. For those of you who are curious, a novel is generally accepted to be 60, words or more. And interestingly enough, none of the three Sheena stories was credited to an author. Scott Peacock , or Robert Turner. And those four jungle stories, along with the requisite advertisements, made up the entire pulp magazine. Table of contents from the sole Sheena pulp. There is no slave brand.

There is a character named Sleman bin Ali , however. Apparently this Sleman bin Ali is a nasty character who has built up quite an organization, enslaving natives and stealing their ivory. We are introduced to Sheena as she steps out of a bathing pool, glistening in the African sun. Yeah, a little pandering, here. They knew what their audience wanted. But it was all strictly G-rated, even by standards. We quickly learn that Sheena leads a tribe of Abama warriors. She meets Rick Thorne , a trader and white-hunter. Sparks fly.

All very proper and G-rated sparks, of course. Sheena has all the atributes you would want in a warrior princess. She is wise and leads her people who follow blindly, not understanding what she is up to, but having faith in whatever she does. She is beautiful, as Rick Thorne certainly notices throughout the story.

In one place, she fights a leopard with nothing but a bow and a single arrow. As the story ends, she has conquered the city built by Sleman bin Ali and has freed the slaves and sent him packing. Rick Thorne leaves, taking the stolen ivory back to the coast. But he vows to return. And indeed, he does, in the very next story! Now that would make for a great story! Pulps were famous for false advertising, and this is yet another case. Poko Na is the bad guy, here. Poko Na is going to show Lavic the secret entrance to a hidden valley filled with ivory. The two will get rich and head off to merry olde England to spend all their money.

Rick Thorne runs into Lavic. Sheena runs into Poko Na. And then the two protagonists combine forces to fight the evil duo.